A tangle of lies, cover-ups and half-truths hide what really happened in Khan Shaykhun and those responsible. in this report we raise more doubts than answers about the chemical attack in Syria, but perhaps this is the order: questioning before answering.

False flag. Undercover operations that have accompanied humanity for centuries, whenever one of the parties in conflict masks their identity to do something and blame others. That this vocabulary of corsairs and spies has become part of the normal vocabulary demonstrates the bad and the good of our interesting times: those actions multiply, but the greater information available quickly alerts those who should have been deceived.

The problem is this operations are difficult to prove, whenever the tracks are hidden and entangled so that no one can interpret them. Something that, of course, those who plan and execute them keep in mind.

Specific case: What happened last Tuesday near Idlib in Syria? Whatever it happened, was it a false flag operation? And who are the real culprits?

Probably none of these questions will have quick answers, if they’re answered at all. But at least we can review how truths, lies and rumors intersect to create the future we move into and that can only generate more mistrust of those powerful who try to manipulate it.

6:37am on Tuesday, April 4 in the small Syrian city of Khan Shaykhun, about 50 kilometers (31 miles) south of Idlib. Some locals were already on their way to their jobs or schools, but many were still sleeping when they were awoken by an attack by the pro-government forces. Almost all the accounts speak of Syrian Air Force planes and some specify that they were two Su-22 fighter-bomber jets (of Russian origin) that launched at least one bomb in the rebel occupied town. Others say there was also an attack with rockets.

The stories, whether from direct witnesses or those who claim to have heard from them, differ enough to make you rise an eyebrow. Mariam Abu Khalil, 14, told The New York Times (on the phone) that she saw a plane dropping a bomb on a one-story building, triggering the typical mushroom cloud, but with a yellowish tone, that turned into a fog and made his eyes burn. Back at home, she saw people coming in vehicles to help and stated that  “when they got out, they inhaled the gas and died.”

According to the rebels themselves, hours later, Khan Shaykhun hospital received a new attack, with rockets, while attending the emergency.

The rebel government of Idlib says that in the chemical attack 84 people died, including 27 children and 19 women, while 546 others were injured and several remain in serious condition.

The victims showed symptoms such as redness of the eyes, foam in the mouth, convulsions, weakness, pupil strongly contracted and difficult breathing (suffocation). “Some cases appear to show additional signs consistent with exposure to organophosphorus chemicals, a category of chemicals that includes nerve agents,” said the World Health Organization the following day.

Although some symptoms do not match, suspicions immediately turned to sarin gas, one of the nervous agents produced by the Syrian government. Another option would be chlorine gas, whose use has also been reported in recent years, but witnesses did not detect its strong smell. The sarin, on the other hand, is odorless, colorless and capable of killing quickly.

Some doctors said the symptoms of those affected were treated by injecting atropine, which is known as an antidote against sarin and other chemical agents.

The use of chemical weapons is a war crime, clearly prohibited in several international treaties. With the signs of this chemical attack –although in many cases without even waiting for hard facts– voices were prompt to accuse the Syrian government and specifically President Bashar al-Assad. Many others directed their accusations to US President Donald Trump because his government declared shortly before that it was not a priority to bring down Assad.

Another serious chemical-weapons incident in Syria occurred on 21 August 2013. An attack in Ghouta (suburbs of Damascus) left 1,400 dead according to the most extreme figures (an analysis of the American CIA). The Syrian government was also blamed for using sarin, but at that time an agreement was signed for Syria to give up their chemical weapons.

The latest public report of the Organization for Prohibition of Chemical Weapons (OPCW), the body responsible for destroying these weapons, was released less than two weeks ago. It states that “As reported previously, all of the chemicals declared by the Syrian Arab Republic that were removed from its territory in 2014 have now been destroyed.”

But it has also been confirmed that the rebels have access to neurotoxic gases and have used them in at least one opportunity (proven by the UN). They may even be able to produce them, thanks to the complicity of other countries.

Several journalistic investigations have reached the same result: Syrian rebels, especially fundamentalists linked to Al Qaeda or the Islamic State, would have received support from Turkey to arm themselves with sarin. Leading journalist Seymour Hersh, who has been a headache for countless US governments since unmasking the My-Lai massacre in Vietnam, has described in detail the ties of the Turkish government with al Qaeda and sarin. In his article “The Red Line and the Rat Line” he even links the supply line with Hillary Clinton and her decisions in Libya. Hersh cites anonymous sources on that article:

‘We now know it was a covert action planned by Erdoğan’s people to push Obama over the red line,’ the former intelligence official said. ‘They had to escalate to a gas attack in or near Damascus when the UN inspectors’–who arrived in Damascus on 18 August to investigate the earlier use of gas– ‘were there. The deal was to do something spectacular. Our senior military officers have been told by the DIA and other intelligence assets that the sarin was provided through Turkey –that it could only have gotten there with Turkish support. The Turks also provided the training in producing the sarin and handling it.’

The quote explains what would be an extraordinary “coincidence” if this is not the real explanation. In fact, the attack on Ghouta coincided with the arrival in the Syrian capital of a team of investigators, sent by the UN because of accusations of previous chemical attacks.

A couple of weeks ago, the rebels had launched from Idlib an offensive directed against Hama, in the Syrian northwest. After initial successes of the groups headed by Hay’at Tahrir Al-Sham (the latest incarnation of Al Qaeda in Syria), Damascus was able to send forces to the threatened sector that is currently rejecting the attack, with the probability of starting to gain territory lost years ago to, yes, Idlib, the main city in that sector.

This counterattack of the last weeks explains the intense bombardment that has undergone the province of Idlib, including Khan Shaykhun. But the targets have been military, not civilians, and that town is at least 12 kilometers (7.5 miles) from the nearest official zone. It’s not a zone of land fighting.

That coincides with the official explanation given by Russia on behalf of Syria: that there was an air strike at noon on Tuesday, but it was directed against a rebel weapons depot, so there were probably chemical munitions there that exploded and caused the Toxic cloud.

An expert quoted by the BBC rejected this explanation. According to Hamish de Bretton-Gordon, ex-commander of the British regiment of chemical, biological and nuclear weapons, “by definition, if you blow up the sarin, you destroy it.”

The expert forgot that sarin is a binary compound; That is, two chemicals that are kept separate until they are mixed to make the deadly gas. If the attacked building was a chemical munitions workshop, it could have had shells with both compounds that were destroyed and accidentally formed the mixture, similarly to what is intentionally done inside a bomb or rocket. The result is different, but it would have generated a toxic cloud of short duration and lethal to the vicinity.

It is not the only case of “interested opinion” or confused.

The same Russian statement, for example, speaks of an attack produced almost five hours after what the witnesses say. There is no explanation about the difference. And if the attack was against an arsenal, why there were no more explosions or fires.

The exact time comes from US radars, who picked up two passes of a single plane over Khan Shaykhun at 6:37am and 6:47am. The same information from the US military says the radars picked up a “flash” on the ground, evidence of the bombing. But it’s important to note that radars do not catch flashes.

Al-Masdar News, a government-affiliated media, said the attack was impossible because the Su-22s can not carry bombs with chemicals, though it’s precisely what Saddam Hussein use them for decades ago. He also said that jihadists had kidnapped days ago villagers from an area recovered by the government forces, which would later be shown as victims of the chemical attack. This information was published hours after the attack, so it is not valid either.

Another media, but akin to the Maara Media Center, showed evidence of aerial bombardment, with images that look like a clear example of rocket attack and even remnants of an artillery shell just like the ones used by several armies that have launched nerve gases.

And what about the opposition journalist who on Monday, the day before the attack, tweeted an announcement that he would report on Syrian air strikes, “including the use of chemical weapons against civilians”? Judging by what he later published, he may have prepared a note on the current fighting around Hama, denouncing alleged previous chemical attacks. But the question remains whether he knew beforehand what would happen.

It is not the only case. The “Idlib Health Minister” was at the camp hospital (a rebel facility) near Khan Shaykhun, when the first wounded arrived at 7:30am that day. And in the city of Idlib there were stocks of atropine that arrived in time to treat the survivors.

A fact that has attracted attention is seen in photographs coming from the rebels themselves: paramedics, trained in the management of sarin gas victims, treating supposed patients without any precaution. Some only wearing gas masks, of which Khan Shaykhun received a shipment three days earlier. Did they know that they were not victims of sarin gas, which would have affected them by simple skin-to-skin contact? 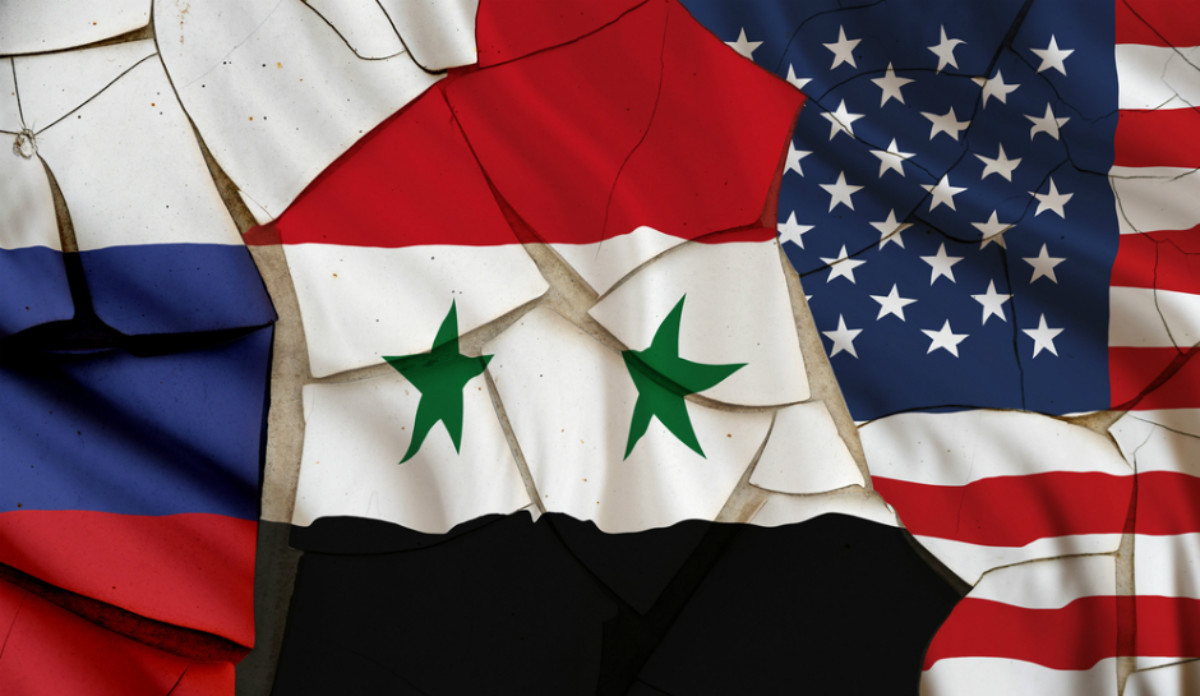 Given the impossibility of having solid evidence, logic can help.

Is it credible that a government is so inept as to launch a chemical attack on the same day that they come to investigate it for another one? Needless to say, the Syrian regime has always denied the use of chemical weapons.

That was in 2013, but now the coincidences are repeated. Is Assad still so inept that he launches a chemical attack days after an official report mentioning his collaboration in the destruction of chemical weapons? Days after his main enemy officially declares that they no longer want to force him out of the Syrian Presidency? A day before an international meeting was held to approve “humanitarian aid” to the area controlled by the rebels?

And why commit a war crime just when the war begins to give positive results for his side? After the painful recapture of Aleppo (where there were also accusations on the use of chemicals), the specter of a military defeat was definitely gone for Syria, unless another power intervened directly in support of the rebels.

And if that intervention were to occur –most probably from the United States– who would benefit? This is the big question that could provide answers to all the others.